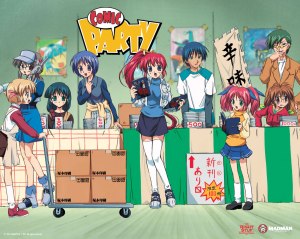 The world of anime cons, or any cons in general, are still somewhat of a mystery to me.  I’ve never been to one.  Thankfully, my friend has convinced me to go to Anime Central in Chicago in May.  I decided to jump back into the series Comic Party.  I haven’t seen it in about two years, and since it’s on the topic of cons, why not see it again to get me excited?

In the beginning, we’re introduced to Kazuki, Mizuki, and Taishi, the main trio of characters, who are classmates.  Taishi is a huge anime fan, who convinces and gives Kazuki support to start creating doujinshi (fan comics), while Mizuki doesn’t understand and shies away from any mention or thought of anime or doujinshi.  With each character they encounter, the show presents a different aspect of anime fandom, whether it be fellow manga creators, cosplayers, or the “creepy” fanboys.

This show truly makes me wish that May was already here.  I may not be accustomed to all the things cons have to offer, but seeing the true emotions that are present in the show makes me what to experience them all.  What makes anime, or any kind of show or movie memorable, is a connection to the story or the characters, giving lasting power and honesty to what it’s trying to say.

For instance, the struggles of Kazuki making his doujinshi, from early success and failure, mirrors what people feel when creating something heartfelt.  Episode 7 and 8 goes through the rough times, and for me, I couldn’t watch it.  Not because it was bad, but because it effectively showcases how someone feels when their creation either doesn’t sell, or isn’t understood, and those dreadful feelings really hit home for me and connected me with Kazuki.

My wife really doesn’t get anime, read it or watch it.  She doesn’t understand why I love anime so much, but she sees my passion for it and encourages me to continue.  Mizuki goes through the same path and finally understands Kazuki’s passions to the point of being able to give him support.

The final thing I want to mention about the show isn’t about character development, but more of a sigh of relief.  No harem.  It’s nice to have a show with the proportion of male to female (2 to 8, respectively) without all the women wanting the male lead.  It makes each female character have depth and development, a welcome change.  More titles should take a page from Comic Party.

I guess what I really love about this series is how it reflects my own life, and life in general.  This trio of characters happens all the time, with a person wanting to create, their friend giving them guidance, and a close friend who doesn’t get why it’s such a big deal.  In the end, everyone helps to contribute to the creative process and crafts something the world hasn’t seen before, and the people involved are happier and come to be passionate about the finished result.   When it comes down to it, Comic Party is about passion.  Loving what you do is why people create.  Money comes later.

There is one episode which is quite depressing, however necessary.  If you have never been to conventions or want to go someday, watch this.  It’s great. 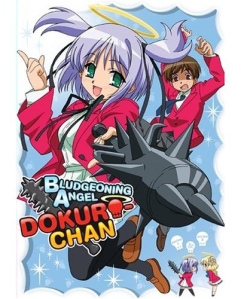 One day I was in my local resale store in the anime section, perusing through the inventory, when I saw this series titled “Bludgeoning Angel Dokuro-Chan”.  It was only $12.99 for the full series, and at the time, I thought I got a really good deal.  The cover looked enticing and the back of the case gave a good introduction.

Then I watched it.

Or rather, the first episode.

At that point, I knew why it was only worth $12.99.  How can I describe such a terrible series by only watching the first episode?  Maybe, after this review, you’ll see and change your mind.

The show starts out with the main character, Sakura, walking home with one of his friends and what appears to be his love interest.  He then makes an attempt to reach out by saying that she can call him whenever he wants.  Nice move, in my opinion (+1 relationship bonus).  He gets to his room to find a girl with a halo, which I’m assuming is Dokuro, fully naked and blushing.  Now usually when this scenario occurs, the girl screams and tells the guy to get out the room.  Instead, she gets a giant metal club and whacks the top half of his head off, spraying blood everywhere, then feels bad and resurrects him.

At that point, I looked at the timer for the DVD.  Only two minutes have elapsed.  Oh boy.

So to make a long story short, Dokuro has been sent from the future to the present to stop Sakura from discovering the secret of immortality and keeping all women from getting older past the point of 12 years old.  The reason for this?  Sakura’s a pedophile.  Then, when that fact is exposed in front of his classmates and the girl he’s trying to get with, he doesn’t shy away from it, saying that it’s no big deal and to just accept him and his interest as a quirk.  No deal.

Throughout the show, I kept thinking of the series Excel Saga, which in my eyes was able to do crazy and gory things for the sake of comedy.  The strength of Excel Saga was that it took violence and converted it into a funny situation that made the blood and death silly.  The best example on how it doesn’t work in Dokuro-Chan is when Sakura takes away the halo from the angel.  She doesn’t lose her powers; she gets diarrhea.  The show could have taken that plot device and made it into something funny, but instead goes too far and the angels exclaim how they can’t hold it in, to the point of almost taking a crap everywhere and saying it out loud.  Completely tasteless.

Did I mention this was only one episode?

Needless to say, I don’t think I’m going to be watching anymore of this.  If you can keep going and drudge through the toilet humor (no pun intended), then by all means, go for it.  Just tell me how it ends.  You might do me a favor.  Might.

With no redeeming qualities other than sick and vulgar humor for the sake of shock value, Bludgeoning Angel Dokuro-Chan is one of the worst series I’ve come across, and I’ve seen many. 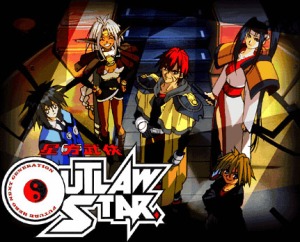 Outlaw Star has been touted as one of the best Golden Age Toonami animes out there.  Its appeal to viewers as a space anime that was about action, adventure, and outlaws was successful with early watchers of the day.  I definitely was an avid viewer of Toonami and Adult Swim, seeing Tom there spout off about Dragonball Z and Voltron.

Real talk.  I have never seen it.

Everyone was telling me that this was seriously legit.  Top 5 of all time, in fact.  To me, in my youth, I thought it was a poor-man’s Cowboy Bebop.  They both have spaceships, an eccentric crew, and the ability to find random jobs for spare cash.  I don’t have the same mindset as when I was 16 where big ships and crazy spaces battles wow me (though I do find those things enjoyable), I give more attention to character development and story.  So finally, after a long awaited trip to the Windlands and a sweet Outlaw Star poster, I decided to give the show a go.

So the show is about Gene Starwind, a person who has aspirations to go to space (the brawn), and Jim Hawking, his business partner (the brains).  The show starts with Gene wishing to go to space to fulfill a destiny of exploration.  Along the way they meet Melfina, a girl with a long undiscovered past, “Twilight” Suzuka, a samurai with a bokken as a weapon, and Aisha, a catlike alien with extraordinary fighting abilities.

From the beginning, Outlaw Star seems darker in nature than its counterparts running during the Toonami block, and the environment of Sentinel-3 with its industrial tone and the other planets and various space installations was a refreshing change to the glamour of envisioned spaceports most animes have today.  One thing I keep going back to is a phrase I call “old fashioned grit”, where animes were still hand-drawn, and the tone was maintained because of its animation.  That animation style is something I still appreciate to this day, and what for me is truly a dividing line between older and newer series.

For all the praise it has from people who watched it a long time ago, there were a few gripes I had with the show that detracted from my overall enjoyment.  To start, the flow of the series was broken for me in a big way.  Outlaw Star starts out with Gene and Jim wishing to go to space, then making it a reality through an outlaw he encounters.  They come across evil pirates, bar fights, and a mysterious girl in a box.  Not to spoil anything, they get their own ship.  Guess what it’s called.

But what rattled my viewing pleasure was the sudden change in the tempo of the show.  In the beginning, the story had a single objective: find the Galactic Leyline.  But once they land on this random planet and make themselves at home, the show transforms into an episodic tempo where they’re doing odd jobs for cash.  The entire crew loses focus on this singular objective and decide to durdle around for no reason other than they don’t have money and they complain about it.  Maybe they should just float in space, where there isn’t any fee for parking.  Just a thought.

Another issue I have is the lack of character development for the cast of the show.  Hardly anything is mentioned about Gene’s past aside from random flashbacks with his father and trying to make it on his own.  The rest of the crew doesn’t get much mention about their stories apart from random lines intermittently tossed out at opportune moments.  I believe that the character who had true potential for development, Melfina, doesn’t get much about her past revealed until the final two episodes.  Also, her story arc seemed rushed, and not well thought out, a big letdown for me personally.

However, despite the issues with the tone and tempo of the show, Outlaw Star’s payoff and true moments in the sun are in the final 8 episodes, and no, episode 23 doesn’t count.  Misato isn’t wishing any fan service here.  The story wraps up in a nice way that deals with all the angles of the show in a way that isn’t clichéd.  Not all the bad guys die, not all the good guys live.  It’s very nice to have a show that is able to do that and doesn’t care about good vs. evil.  Space, for all its infinite darkness, is just gray area when it comes to outlaws and pirates.

For the lack of development and tone issues, Outlaw Star’s story isn’t too deep or mind-numbing.  It’s a good action anime to just sit down and watch.